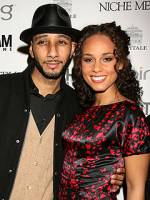 Alicia Keys, who has 12 Grammys under her belt, is expecting her first child.

Keys has confirmed she is pregnant and now engaged to the child's father, music producer Swizz Beatz.

Beatz and Keys have been friends for several years and worked together on one song for her current album, 'The Element of Freedom'.

Keys recently admitted that motherhood was something she was very much looking forward to: "I absolutely am very interested in starting a family. It is one of the most beautiful experiences to have in this life and I am looking forward to it when it is my time."

The couple is engaged to be married in a private ceremony later this year. It will be the first marriage for Keys.