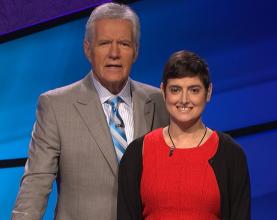 'Jeopardy' host Alex Trebek said his farewell to Cindy Stowell, the contestant who died one week before her episode aired, on Wednesday.

The episode marked the end of Stowell's six-game winning streak on the show. Trebek paid special tribute to the 41-year-old, who lost her battle with Stage IV cancer on December 5.

"For the past six Jeopardy! programs, you folks have been getting to know the talented champion, Cindy Stowell. Appearing on the show was the fulfillment of a lifelong ambition for that lady," Trebek said.

"What you did not know is that when we taped these programs with her a few weeks ago, she was suffering from Stage IV cancer and sadly, on December 5, Cindy Stowell passed away. So from all of us here at Jeopardy!, our sincere condolences to her family and her friends."

Stowell earned a total of $105,803, all of which she promised to donate to cancer research.

Her boyfriend had said she was on painkillers during taping, fighting a high-grade fever and blood infection.

Stowell was fast-tracked on the show after she told producers, following her audition, that she only had six months to live.