Alex Rodriguez and Torrie Wilson Split After Three Years Together 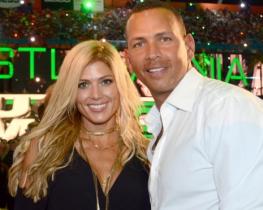 Alex Rodriguez and girlfriend Torrie Wilson have split after dating for three years.

The 39-year-old New York Yankee began dating the Wilson in 2011, shortly after he ended his relationship with Cameron Diaz (photos

Neither has commented on the split but Wilson posted a message on Twitter that read: "Beautiful things happen when you distance yourself from negativity."

"There's nothing like a friend who has been there to see it all," along with the hashtags #NeverForgetYourGirlsLadies and #ForeverAGirlsGirl.

Alex Rodriguez was kept off the field for the entire 2014 season for using performance-enhancing drugs.

), who he was with between Diaz and Wilson, said: "I personally think that you make the choices you make and you should reap the consequences. People have a right to feel betrayed. Lance Armstrong and Alex are phenomenal athletes who have made some bad choices and let a lot of people down."