Alec Baldwin's Wife Wants Fourth Child: 'Right After I Deliver I Want Another One' 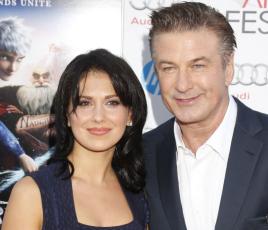 Alec Baldwin's wife, Hilaria, says the wants a fourth child with the actor.

The couple, who already have three children under 4, say they're not done expanding their family.

"Yes! I would totally do one more!," Hilaria, 33, tells Access Hollywood.

"For some reason right after I deliver a baby I want another one. It's kind of I feel like it's like going down this, like, crazy slide, and then you're, like, 'I wanna go again.' Cause it's just so invigorating and I had great experiences."

"It's definitely something we would consider doing again. One more time! But, like, imagine if it were twins! Oh my God. Or triplets? No, that would not happen. Doesn't run in our family."