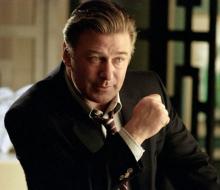 Alec Baldwin, who deleted his Twitter account after unleashing a rant against a reporter who claimed the actor's wife was tweeting during James Gandolfini's funeral, says he's finally done with Twitter.

Baldwin says he's decided that social media is "all a waste of time."

"I went to Jimmy Gandolfini's funeral, and when I was there I realized Jimmy Gandolfini didn't have Twitter," he tells
Vanity Fair'. "Jimmy Gandolfini was so beloved as a person, and he was so admired as an actor, and he didn't give a f--- about social media."

"I really learned a lesson at the funeral. I said to myself, 'This is all a waste of time.' Meaning it's fun sometimes, but less and less, and less. It's just another chink in your armor for people to come and kill you."

However, this isn't the first time Baldwin has attempted to leave Twitter. He first shut down his account after a dispute with American Airlines in December 2011 and briefly last summer after marrying Hilaria.

In the interview, Baldwin also says he would quit acting if he could.

"That would be the greatest thing in the world," he said. "If I could find something else to do."

"Everyone has seen how certain things have played out with my daughter, which has been very painful—it's been really unpleasant. I have one dream in my life and that is that this daughter I'm having—she comes to me about seven or eight years from now, she has a friend, and she's at her house and she says, 'Daddy, Susie's mom says you used to be on TV. Daddy, is that true?'"

"She has no knowledge of me as a public person. That would be heaven for me."