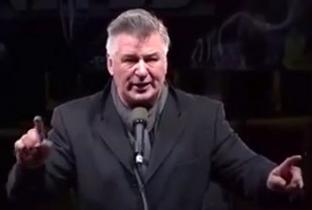 ), Rosie Perez and Cher at an anti-Trump rally in New York city on Thursday.

De Niro was the first celebrity speaker to take the stage at the rally outside the Trump International Hotel and called the President-Elect "a bad example of this country and this city."

"We're all rooting for the new administration, of course, to abandon the divisive, racist, misogynist, ignorant plans it's 'trumpeting' and lead us with intelligence and compassion," he said. "Whatever happens, we Americans, we New Yorkers, we patriots, will stand united for our rights and the rights of our fellow citizens."

Baldwin opened with a brief impression of Trump.

"These people are a disgrace, but there is hope," the actor then said. "Trump and Pence think you're going to lay down. That's one thing about New Yorkers: You don't lay down."

"Man, I needed this. Did you need this?," Ruffalo told the crowd. "We're coming here tonight to protect something precious to us, and that's each other."

Meanwhile, Cynthia Nixon had a message for the LGBTQ community.