Alec Baldwin: 'Lying Thieves' Will Be In The White House If Obama Loses 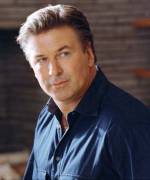 Alec Baldwin says he wants Barack Obama to win another term because he doesn't want to see "lying thieves" back in the White House.

"You wanna go back? To Bush? Cheney? Paulson? Rumsfeld? Unfunded wars? Death of U.S. soldiers and innocent civilians for oil?," Baldwin asked in a series of Twitter posts on Tuesday.

"You wanna go back to lying thieves in the White House who make war under false pretenses in order to make money for their friends?"

"The election is around the corner. You want another corporate puppet who will squander more US natural resources, revenue and perhaps lives?"

"Just to protect that breed of wealth that wants America to finally accept a European model of plutocracy?"

When one of his followers suggested, if he believed in the cause so strongly maybe he should run, Baldwin said he "would run if I could win."

"Too many reactionary haters in the right wing for that to be possible," he replied.