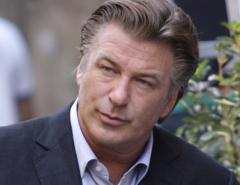 Alec Baldwin may be an A-list actor and movie star but he certainly isn't doing his 'Saturday Night Live' Donald Trump impression for the money.

A profile of Baldwin in The New York Times reveals he makes just $1,400 for each appearance on the show.

Baldwin says rather than try to delve deep into Trump's pysche, he studied how Trump talked and moved for the impression.

"I see a guy who seems to pause and dig for the more precise and better language he wants to use, and never finds it," Baldwin says.

"It's the same dish. It's a grilled-cheese sandwich rhetorically over and over again."

As much as Donald Trump would like him to, Baldwin doesn't plan on giving the impression either.

"I think that now that he is the president, we have an obligation — as we would if it was him or her — to dial it up as much as we can," he says.