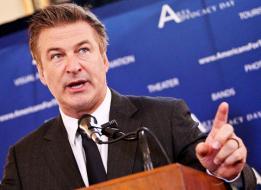 Alec Baldwin was scolded in court on Thursday in an appearance to address his bike riding arrest in May.

Baldwin was charged with disorderly conduct after he became belligerent with officers who stopped him for riding a bicycle the wrong way down a one-way street.

After Baldwin offered to pay a fine for the violation, the judge said he was looking for an apology -- but that never came.

"Can you stay out of trouble, Alexander?," DeLury asked.

"Sure, sure," Baldwin replied.

DeLury told Baldwin the case would be dismissed if the actor stayed out of trouble for six months.

But almost immediately after the appearance, Baldwin proved not much had changed as he posted exactly the same message on Twitter that he did following his arrest.

"NY City is a mismanaged carnival of stupidity that is desperate for revenue and anxious to criminalize behavior once thought benign," he wrote.