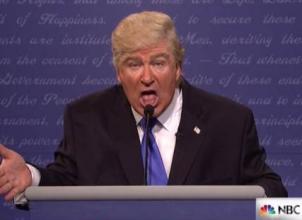 Baldwin railed about jobs leaving the United States and even complained his microphone was broken.

"She broke it with Obama," he pointed to Clinton. "They stole it. They took my microphone to Kenya and broke it."

"Our jobs are fleeing this country. They're going to Mexico. They're going to Jina," he said. "I would stop that. If Hillary knew how, she would have done it already. Period. End of story. I won the debate, I stayed calm, just like I promised, and it is over. Goodnight Hofstra."

"I have the best judgment and the best temperament," Baldwin's Trump said. "She's the one with the bad temperament. She's always screaming, she's constantly lying, her hair is crazy, her face is completely orange except around the eyes where it's white, and when she stops talking her mouth looks like a tiny little butthole."

He also interrupted Clinton's responses with "Wrong!" and "Shut up!"

"Can America vote right now?," asked McKinnon's Clinton, who also did the infamous shimmy from the debate.

"I get it: You hate me. You hate my voice and you hate my face. But if you never want to see my face again, elect me president and I swear to God I will lock myself in the Oval Office and not come out for four years."