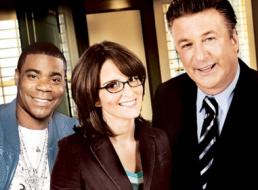 A day after saying next year would be '30 Rock's final season, Alec Baldwin is now backpedaling.

"I will tell you one thing," Baldwin said yesterday. "And that is our show next year is our last year of the show. Our contracts are expired in 2012, and Tina is going to have a big career directing films and writing."

"Gosh," Baldwin now says of his remarks, which no doubt raised the ire of NBC executives. "I want to take the opportunity to state that although my days on network TV may be numbered, I hope 30 Rock goes on forever."

"Or at least as long as everyone involved desires."

"Next year hopefully won't be the last. Kenneth can run the network. Jenna will get her own talk show. Tracy will become Mayor of New York. Then resign to go raise exotic reptiles. And Lemon will go do.... just about anything she sets her mind to."