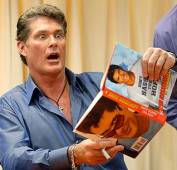 A&E has released a new promo for its reality TV show 'The Hasselhoffs', starring David Hasselhoff.

The ad titled 'Some People Are Born Awesome' shows a hairy baby running across the beach in the style of 'Baywatch'.

As we reported when the show was first announced in January, the series "will take a behind-the-scenes look into the life of 'The Hoff' focusing on his multiple entertainment and business endeavors, as well as his most important role as a single dad trying to help his teenage daughters' break into the recording industry."