Adriana Lima: I Won't Take Clothes Off Anymore For An 'Empty Cause' 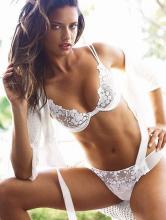 ), who has a net worth of a reported $75 million, says she'll no longer strip down for an "empty cause."

"I had received a call for the possibility of filming a sexy video of me," she tells her fans on social media. "Even though I have done many of this type, something had changed in me, when a friend approached me to share that she was unhappy with her body."

"Then it made me think.... that everyday in my life, I wake up thinking, how do I look? Was I going to be accepted in my job?"

"And in that moment I realized that majority of woman probably wake up every morning trying to fit in a stereotype that society/social media/fashion etc imposed... I thought that's not a way of living and beyond that.... that's not physically and mentally healthy, so I decided to make that change... I will not take off my clothes anymore for an empty cause...?"

"My job puts me in such big pressure to look a certain way. I was thinking, how can we have to carry so much..... I am tired of the impositions, we 'as women' can't be continuing living in a world with such superficial values, it's not fair for us, to behave, to look.. I want to change it, on the name of my grandma, my mother, and all her ancestors that have been labeled, pressured, misunderstood. And has to live according to Society... I will make that change... I will start with me."

The Brazilian-born Adriana Lima, 36, earned a reported $10.5 million last year. She made her debut for Victoria's Secret in 1999.