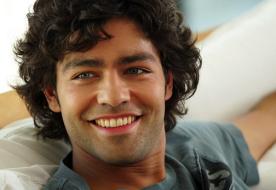 Adrian Grenier thought he would be upset after former 'Bachelor' winner Courtney Robertson wrote about their fling in her tell-all book but says he isn't.

Robertson revealed in her book 'I Didn't Come Here to Make Friends' that she hooked up with the 'Entourage' star and noted she was impressed with the size of the "sweet but non-committal" actor's member.

"She said you had the biggest d**k she's ever seen," Andy Cohen questioned Grenier on 'Watch What Happens Live'.

"I was just glad she got the size right," Adrian quipped back. "And she's seen a couple of them, huh?"

"You're always on the edge of your seat waiting for something bad to be revealed about you and then every once in a while, it's not so bad," he grinned.

Adrian Grenier was also asked about the possibility of another 'Entourage' movie.

Grenier had previously said he was up for the idea but it appears after the film's less than stellar box office performance, he's resigned to the idea it won't happen.

"Sadly I'm gonna have to say it's over," he said. "We quit while we were ahead, we went out on top, but you know you can rent it, you can re-watch it over and over again."