Adele Not Obsessed With 'Being Thinner Or Having Bigger Boobs' 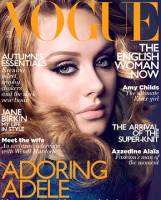 Best-selling British soul singer Adele hopes to cap a spectacular year by winning the UK music industry's Mercury Award for Album of the Year, but that doesn't mean she's getting used to the fame.

"I puke quite a lot before going on stage," the 22-year-old tells British Vogue in an interview.

"Though never actually on stage," she clarifies. "But then, I shit myself before everything. The bigger the freak-out, the more I enjoy the show!"

Adele been dominating the charts since the release of '21' in January.

Although one thing she's not concerned about is obsession with diets and body image.

"I've seen people where it rules their lives, who want to be thinner or have bigger boobs, and how it wears them down."

"And I don't want that in my life. I have insecurities, of course, but I don't hang out with anyone who points them out to me."

As for whether she's got a special man in her life, Adele explains she'd rather wait.

"I do get massively distracted when I've got someone in my life, which I can't afford to do right now. Besides, no one treats me as well as I do."

"But if I have children, I want five boys. Boys love their mothers whereas girls can be so mean to each other."