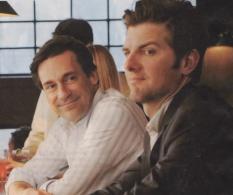 Adam Scott tells a story about getting kicked out of a wedding after he and Paul Rudd pulled out their privates during a special congratulatory video message to the bride and groom.

Scott says both actors thought it was hilarious at the time. Until the video was shown in front of everyone and they're were told to leave.