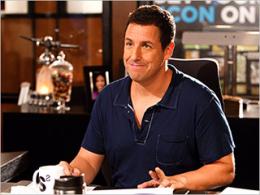 Adam Sandler is surprising people with his performance in Noah Baumbach's 'The Meyerowitz Stories' at the Cannes Film Festival.

Sandler's performance is reminding critics of his dramatic turns in 'Punch Drunk Love' and 'Spanglish'.

"With no shtick to fall back on, Sandler is forced to act, and it's a glorious thing to watch — even for those fans who like him best in perpetual man-child mode," says Variety.

"Adam Sandler has been bad in so many awful films that when he's terrific in a great one, it's both a revelation and a windfall – like you're digging around at the back of the garden shed for the first time in years and find a Picasso propped up against the wallpaper steamer," raves The Telegraph.

"Sandler, in particular, is asked to go places he hasn't been as an actor since Punch-Drunk Love — and he gets there so seemingly effortlessly, and with such comedic precision and control of sentiment (the way he plays Danny's relationship with his daughter is delightful), you wonder what it would take for him to do it more often."

For his part, Sandler said at a panel for the movie: "It's different for a comedian to get an offer like this. My first thought is I don't want to let anyone down. I was misty-eyed, laughing. I just couldn't believe we were going to do this movie."