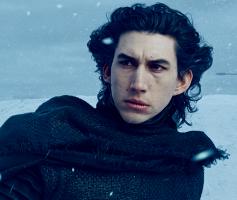 Driver, who says he was inspired by Fisher, calls her "a once in a lifetime personality."

"She burns very bright and has such a great, very generous energy," Driver says speaking about Fisher in the present tense.

"And for that to suddenly not be on set or and publicity at a 'Star Wars' event or anywhere, you know... to have her character missing from that very small unit is a tragedy."

Driver says the last time he was Fisher was when they finished filming the next installment last summer.