Acura Apologizes For 'Not Too Dark' African American In Superbowl Ad 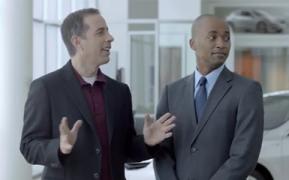 Acura is apologizing after its casting call from this year's Superbowl ad revealed that the company required a "not too dark" African American actor to play the role of the car dealer.

"We apologize to anyone offended by the language on the casting sheet used in the selection of actors for one of our commercials," says the car company.

The ad starred Jerry Seinfeld and Jay Leno as the two attempted to get the very first Acura NSX.

"The casting sheet was only now brought to our attention. We are taking appropriate measures to ensure that such language is not used again in association with any work performed on behalf of our brand."

"We sought to cast an African-American in a prominent role in the commercial, and we made our selection based on the fact that he was the most talented actor," it adds, trying to deflect any discrimination bias.

The casting sheet was leaked by an African American actor who didn't fit the profile.