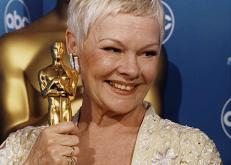 Dame Judi Dench says she's been diagnosed with macular degeneration, an eye condition which can cause blindness.

The 77-year-old actress, who has been in six James Bond films as M, says in an interview that her eyesight is now so bad that she can't even read her own scripts.

"I can't read scripts any more because of the trouble with my eyes," she tells the 'Mirror'. "And so somebody comes in and reads them to me, like telling me a story."

"It's usually my daughter or my agent or a friend and actually I like that, because I sit there and imagine the story in my mind."

"You get used to it," she continues. "I can do a crossword if it's bright sunshine, but if a cloud comes out, the next minute I can't see anything."

"As long as there is a possibility of working, I'm not going to retire. If I retire, nothing will work any more, and it's hard enough as it is."

"The most distressing thing is in a restaurant in the evening I can't see the person I'm having dinner with."

She also misses going to the theater, one of her favorite pastimes.

"I know there might be something going on, but sometimes, I can't see it and that infuriates me as I think I'm really missing out on something."