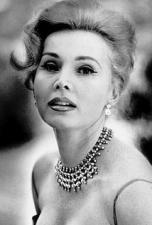 Zsa Zsa Gabor has died at 99-years-old, her rep has confirmed.

The actress and socialite, who was a former Miss Hungary, suffered a heart attack Sunday and was pronounced dead at the hospital.

Gabor, who was married nine times, was best known as a sex symbol with a taste of the rich life.

)'s grandfather, and married him. The two divorced in 1947 after five years and one child together.

She famously had affairs with the likes of Frank Sinatra and John F. Kennedy.

Zsa Zsa made her big screen debut with a role in the 1952 film 'Lovely to Look At' and went on to star in 'Moulin Rouge', 'We're Not Married', 'The Story of Three Loves', 'The Girl in the Kremlin' and 'Touch of Evil'.