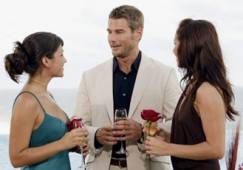 ABC's 'Bachelor' and 'Bachelorette' franchises are being sued for alleged racial discrimination by a group of Nashville residents.

Nathaniel Claybrooks and Christopher Johnson, both African-Americans, say they are suing the reality shows because "over 10 years and a combined total of 23 seasons, neither show has ever featured a single person of color in the central role of the 'Bachelor' or 'Bachelorette.'"

Johnson says that when he and Claybrooks, both aspiring football players, went to a Nashville audition for The Bachelor, producers asked what they were doing there.

He claims they were then sent to the side of the room and left out of the normal audition process.

Neither was called back, and they believe it's because of their race.

Last year, executive producer Mike Fleiss was asked when either show would star someone who wasn't white.

"We really tried, but sometimes we feel guilty of tokenism," he said. "Oh, we have to wedge African-American chicks in there! We always want to cast for ethnic diversity, it's just that for whatever reason, they don't come forward. I wish they would."