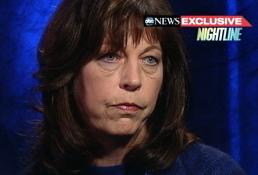 ABC News is set to air what's being described as an 'explosive' interview with Newt Gingrich's ex-wife Marianne Gingrich on Thursday night's 'Nightline'.

The interview was conducted earlier this week by Brian Ross, the network's chief investigative correspondent, and ABC has been debating on the 'ethics' of airing the interview days before the South Carolina Primary.

A decision was tentatively made to air the interview next Monday, after the votes were counted. However, the network has now decided to air it Thursday night with excerpts being released ahead of the Republican candidate debate Thursday evening in Charleston, South Carolina.

Marianne has previously said that her ex-husband's career could come to an end if she shared what she knew.

"He believes that what he says in public and how he lives don't have to be connected," she said last year.

Gingrich proposed to her before the divorce from his first wife was final in 1981. Their marriage ended with divorce in 2000 when Gingrich became involved with another woman -- Callista Bisek, a former congressional aide who would become his third wife.

One of the first quotes that has leaked out from the interview says that Gingrich wanted an open marriage (i.e. he wanted to stay married to her but still let him have an affair with Calista, now his wife).

"I said 'we've been married for a long time,'" says Marianne. "And he said, 'Yes, but you want me all to yourself. Calista doesn't care what I do.' He was asking to have an open marriage and I refused. I said 'No, that is not a marriage.'"

Ironically, the former speaker, who publicly railed President Bill Clinton for his affair with Monica Lewinsky, was himself having an affair at the time.