ABC Names Ben Flajnik As The Next 'Bachelor' 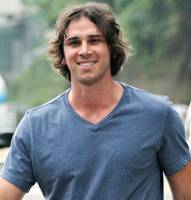 'The Bachelorette's Ben Flajnik will get another chance at finding love on camera.

Ben, who proposed and was rejected this past season by Ashley Hebert, has been announced as ABC's new 'Bachelor'.

The 28-year-old winemaker, who moved to Sonoma, California after the death of his father in 2007, beat out fellow contestants Ryan Park and Ames Brown to star on the show.

Upon turning down Ben's proposal, Hebert became engaged to JP Rosenbaum on the show's finale.

The show returns with a new cycle in January. And before you watch the entire season, just remember no bachelor has gone on to marry the woman he picked.

Yes, Jason Mesnick got married to someone he met on the show but don't forget he famously dumped Melissa Rycroft, after picking her at the final rose ceremony, for fellow finalist Molly Malaney first.