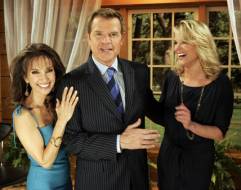 ABC has cancelled long-running daytime soaps 'All My Children' and 'One Life to Live'.

The move leaves 'General Hospital' as ABC's only daytime drama. The staples, which had a combined 20,000-plus episodes between them since they premiered in the late 60s, will end in September and January, respectively.

Emmy winner Susan Lucci, who has starred on 'All My Children' for the past four decades, thanked those that have made the show possible over years.

"It's been a fantastic journey," she said. "I've loved playing Erica Kane and working with Agnes Nixon and all the incredible people involved with All My Children. I'm looking forward to all kinds of new and exciting opportunities."

"This is like losing a member of your family," Kelly Ripa said in her own statement. "All My Children was more than a job - it was my family. It was there that I met my husband; it was there when my first two children were born; it was there where I met many of my life-long friends. It was the greatest training ground ever. I feel heart sick."

The soaps will be replaced with talk shows about food and healthy living called 'The Chew' and 'The Revolution'. The cancellation of these shows follows the axing of CBS' 'Guiding Light' and 'As the World Turns' over the last two years.