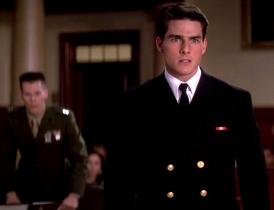 Oscar-winner Aaron Sorkin is bringing a live performance of drama 'A Few Good Men' to NBC.

Sorkin will adapt and produce the Broadway play that turned into the hit movie, starring Tom Cruise and Jack Nicholson, for television.

Loosely based on a real-life court martial case from 1986, the play focuses on inexperienced Navy lawyer Lt. Daniel Kaffee, who must defend three Marines on trial for the murder of a comrade. It earned a Tony nomination and earned four Oscar nominations, including Best Picture.

He will executive produce along with Craig Zadan and Neil Meron, who have produced NBC's recent live musicals.

The live production is a turn from NBC's recent musicals which have been musical, light-hearted features such as 'The Sound of Music Live', 'Peter Pan Live' and 'The Wiz Live'. Although NBC does have 'Hairspray' coming later this year.

"I've been incredibly impressed watching NBC resurrect live musical theater for television and I'm eager to team up with Craig and Neil to help bring live drama back as well," Sorkin says in a statement.