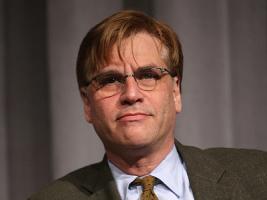 In the letter, Sorkin expresses his disbelief that "a thoroughly incompetent pig with dangerous ideas, a serious psychiatric disorder, no knowledge of the world and no curiosity to learn" emerged as president.

"Angry young white men who think rap music and Cinco de Mayo are a threat to their way of life (or are the reason for their way of life) have been given cause to celebrate. Hate was given hope."

The creator of 'The West Wing' says not being able to "protect" his family from the impending consequences of a Trump win is a "terrible feeling for a father."

He ends his letter by saying: "For the next four years, the President of the United States, the same office held by Washington and Jefferson, Lincoln and Teddy Roosevelt, F.D.R., J.F.K. and Barack Obama, will be held by a man-boy who'll spend his hours exacting Twitter vengeance against all who criticize him."