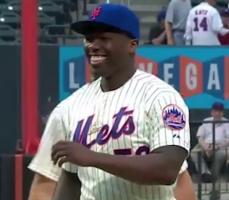 50 Cent may have sold millions of albums over his career but he apparently can't throw a baseball.

The rapper, whose real name is Curtis Jackson, had the honor of throwing out the first pitch at the New York Mets game against the Pittsburgh Pirates on Tuesday.

But he's being mocked after wildly throwing the ball nowhere near home plate. It's being called the "worst pitch ever."

Much to the relief of Carly Rae Jepsen, who held that distinction alone since last year.