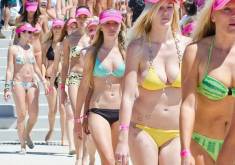 More than 350 Bikini-clad women set a new Guinness World Record for the largest bikini parade in Australia and promote the Gold Coast at the same time.

The women's 1.6km walk along the streets and beach of Surfers' Paradise on Sunday was broadcast live on national television, and officials from Guinness World Records were on hand to verify the new record.

The previous record, of 331 participants, was set in the Cayman Islands in June 2010.

Of course, since this story would not be complete with some visual evidence:

A longer, six minute, look at the bikini parade: