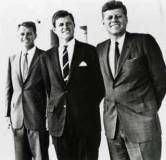 The History Channel has lined up Joel Surnow, the Emmy Award-winning creator and former executive producer of '24', to create its first-ever scripted series.

The cable network says the eight-hour miniseries, called 'The Kennedys', will be akin to The Godfather movie trilogy, told from a multi-generational point of view.

Some of the world events depicted will be the Cuban missile crisis, the civil rights movement and the invasion of the Bay of Pigs.

As for how writers will differentiate between what's fact and fiction, Surnow says: "There's a great quote that Michelangelo had about sculpting. He said when you sculpt a horse, you take a big clump of clay and then you cut away everything that's not the horse. That's what you do here."

"Each episode is driven by an emotional dynamic that's driving the characters. Everything that isn’t that, that doesn’t feed into that, becomes stuff you cut away."

"For instance, the Cuban Missile Crisis, when we first sat down to break out that story, it’s kind of dry. We didn’t want that to dominate that episode, and we really found the personal story that’s told, that the Missile Crisis stimulates and brings to the fore."

"I was born in the early 50s, so I remember them quite well, and came from a family that adored them. This project started as the brainchild of the History channel and got to me,"

Surnow explains to the 'New York Times' about how he became involved in the project I would say that I wasn't completely as well-versed the real story of the Kennedys."

The scripts will be written by Stephen Kronish, also a former co-executive producer of '24' and a Kennedy scholar.

"I knew what probably most of us know, through the events that transpired in the 60s, and I called my friend Steve Kronish, who is as smart and knowledgeable about the Kennedys as anybody I knew. He sat down in my backyard one afternoon, and started telling me the story of how Jack Kennedy became president, and all the specifics of Joe and Rose."

"It became a rambling, three to four-hour conversation, and we realized that the way to tell the story is as the relationship between a father and his sons — the sons living out the father’s ambition."

It will include flashbacks to the brothers' early years, but the core of the story is expected to revolve around the pair's relationship with their father.

The project is slated to begin shooting next spring, with an air date in 2011. No one has been cast in the miniseries yet.