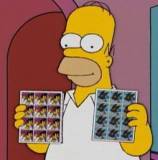 A 19th Century village statue has been turned into Homer Simpson as part of a practical joke that sees the statue dressed up as a different character every year.

The tradition, which goes back 40 years, has seen the statue of Lord John Scott in Warwickshire, UK change into Harry Potter, Guy Fawkes, Shrek, and Spiderman.

"I have lived in the village for over 40 years and people were dressing up the statue before that," says Tony Kember, Chairman of the Dunchurch Historical society, as he admits that noone seems to know who the pranksters are.

"I remember him being dressed up as Guy Fawkes and Father Christmas 40 years ago. Now the pranksters dress him up as modern cartoon characters."

"It is very weird. I live literally opposite the statue for years and have never been able to catch the pranksters in the act. Nobody in the village seems to know who the culprits are, or if they do they are not telling anyone."

"People in the village love seeing the statue dressed up, it is always a surprise which character he will be."

Lord John Douglas Montague Scott was a 19th century landlord who owned the majority of the village until he sold it back before his death in 1860. 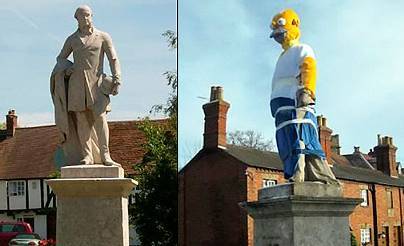